Dhanvantari : God of medicine and Ayurvedha. Came with Amrutha Kalasha during Samudra mathana.
Every year on Karthika Trayodashi we are celebarating “Sri Dhanvantari Jayanthi” and perform Dhanvantari Homa in the temple.
By praying God Dhanvantari one can get rid of disease and achive Arogya (Good health)

According to Puranas, when Devas(gods) and Asuras (demons) churned the ocean for Amrita (nectar of immortality), it was Lord Dhanvantari who came out of the ocean with a pot of Amrita.
Thus, Dhanvantari is considered as a lord who grants long life and immortality.

What does the word Dhanvantari mean?
(a) The word dhanus is only indicative (upalakshna). It denotes the science of surgery. The one who has seen the end (anta) of it is DHANVANTARI.
(b) The word dhanvan means a desert. (Ref. RIGVEDA [V.36.1] dhanvachara meaning, he who moves in a desert). There is a mantra in the Veda: “dhanvan iva prapaaasi” (0 Lord! You are like the place where water is distributed to travellers in a desert.) Thus, DHANVANTARI the incarnation of Lord VISHNU with a pot of nectar in His hand is like prapaa (water spot) in the desert of worldly existence.

The BHAGAVATA PURANA refers to DHANVANTARI as “smritamaatra aartinaasanah”(One who destroys all sufferings even when remembered). 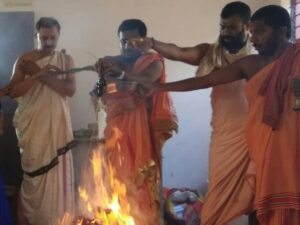 Incarnation of Lord Dhanvantri :
He is often represented as a God with four hands (similar to Vishnu) carrying Shankha (conch), Chakra (disc), leech, and a pot containing Amrita. Leeches play an important role in Ayurvedictreatment.

Dhanvantri mantra :
“Om Namo Bhagavathe Dhanvantaraye! Amrutha Kalasha Hasthaaya sarvaamaya Vinaashaaya trailokyanaathaya Mahavishnave Swaaha”
We pray to the God, who is known as Dhanvantari. He holds the Kalasha full of nectar of immortality removes all fears and removes all diseases and is the well wisher and the preserver of the three worlds. Dhanvantari is the 12th avatar of Lord Vishnu, empowered to heal the Jiva souls.

May Lord Dhanvantari bestow good health, longevity and youthfulness to all of us.
…shivoham